A Royal encounter with Batik

During these troubled times with fighting an invisible enemy, the Coronavirus, we don't really get the opportunity to talk about other matters and thats very logical. Be safe first, keep your distance, but also reach out to your family, friends and neighbors and see how you can help. This time can be used well for those who are not sick, or have work we can't do without right now, or don't have their kids at home. For these people use this time to learn and reflect.
I hope my blog can be one of these places to read, enjoy and study. Since I am stuck at home, my research can continue from here, but I can't access any actual archives. Probably most other work, like public talks will be cancelled also, so luckily I have my own online Batik world.

Before Covid-19 was all the news, we in the Netherlands were very focussed on our Royal couple and their upcoming, and just ended, state visit. There was commotion on the timing (they went in March, while Indonesia will be 75 years independent in August), questions on if there would be finally an apology and when it came it was about if the apology should have come from our King. And lastly on the return of a Keris that would, or could have been from Prins Diponegoro (1785 – 1855), but should have been found earlier, returned sooner and not used as a political tool.
I follow this news closely, from both and other sides. I found it important to know current political developments regarding our colonial history, and yes, a visit to a former colony will always be connected to that history. I don't really share about it, since I don't want to get in online fights...however you will find from the links above what my thoughts are.
With all this going on it didn't caught my attention until Danar Hadi posted it on their Instagram, that our queen Máxima had a little Batik encounter. 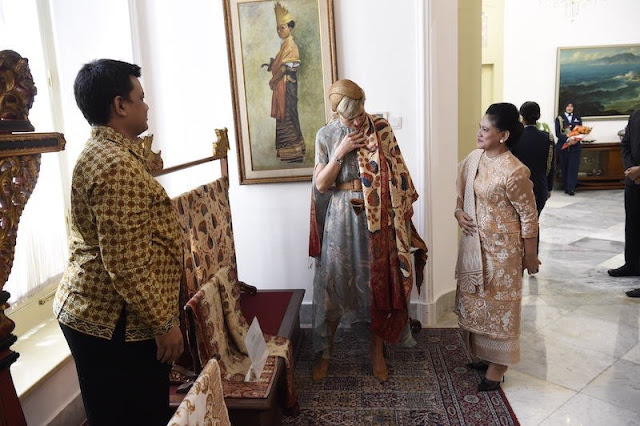 In 2014 I dedicated a post to our former queen, prinses Beatrix, on how she uses her clothing as tools of expression. She did wear clothing with Batik and Chintz motifs, of which I still don't know if they are handmade or printed textiles, but she wore them on interesting moments in time {Read more in the blogpost Dutch(n)ess}.
Her daughter-in-law, our current queen Máxima, doesn't use clothing in the same. She is very fashionable, but there is no hidden messages to be found, which often is a pity. Yet she started many fashion-trends, we all recall the postbode-zak couture (Mailbag couture).
So I am not that focussed on what she is wearing, but was focussed on their activities while they visiting many locations in Indonesia. I spotted them wrapped in Ikat, trying a lot of food, but no Batik...until yesterday!
Apparently the day of The Apology, was also the day queen Máxima was shown some Batik during the visit to the presidential palace in Bogor. The palace is at the Botanical Gardens I visited last year. The palace is impressive building with colonial roots. After the post on Danar Hadi, I did some research, and the Queen was not only shown Batik, she tried it even! On only one media outlet I found a picture her making Batik! 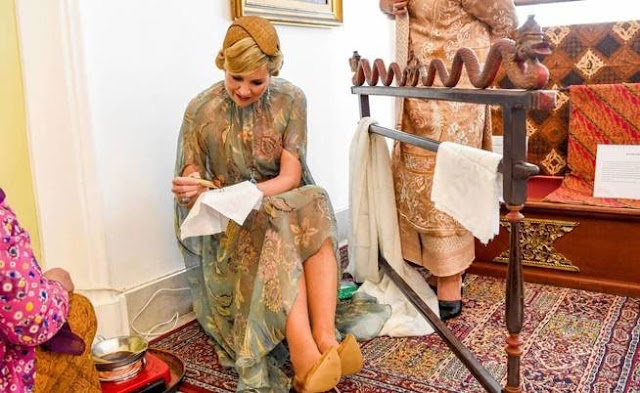 I also asked around and got kindly from Miss Asti of Museum Danar Hadi some background information. Danar Hadi advised Ibu Iriana, the first lady of Indonesia, to make a display of Batiks with a Indo-European influence, either old ones made by for example Batikentrepreneurs Van Zuylen or Metzelaar or new interpretations made by Danar Hadi. Danar Hadi in Jakarta made the pop-up exhibition at the palace, so it is unclear if the pieces are new or old. But they wanted to address this shared history that can be found in the heritage of Batik.
The piece Queen Máxima is photographed with the most, I could vaguely trace back to a piece I saw during my last visit to the Danar Hadi Batik museum in Solo. The piece attributed Batikentrepreneur Von Franquemont, whom I am researching, is on display right next to a sign with her name. Apart from that, this attribution must be taken very, very lightly. From what I gathered the information got mixed up from the collection over time, was wrongly translated and from the beginning lacked real evidence. Still fun that from all pieces, it is, a new made interpretation of this one, she seems to be wearing. 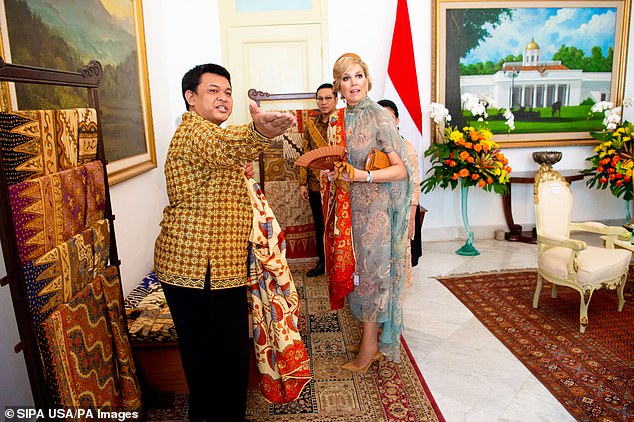 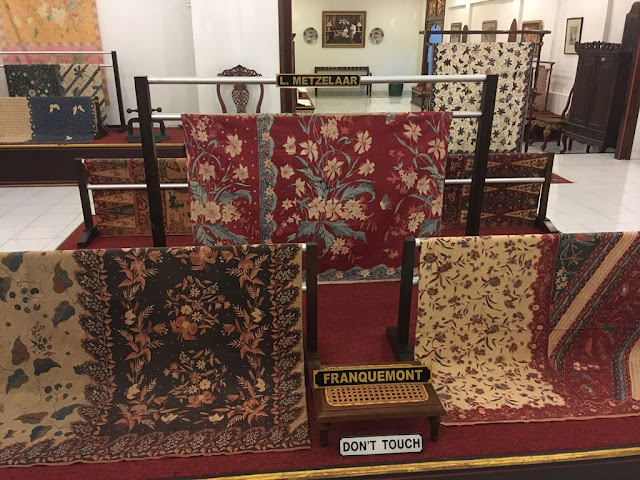 Batik in the left corner shows a similar motif on the Badan, body, of the cloth,
photo by me at Museum Danar Hadi 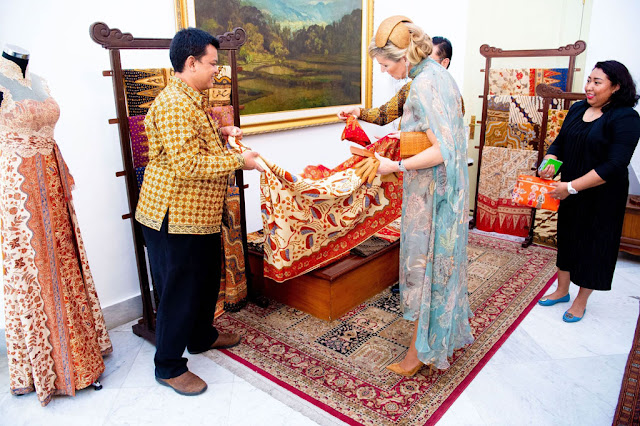 
On photos were more of the display is shown, not all Batiks shown, show a clear selection on Indo-European style. The one she was holding and the one on a mannequin has things we can interpret as Indo-European influence, but the rest seems to be clearly more modern designs.
While looking for the photos of the queen, I remembered previous collections made by Danar Hadi inspired by Indo-European Batik designs. They make a ready to wear collection called DAYS.
DAYS is made with only printed textiles, but based on designs from the huge collection of original handmade Batiks. So often designs are very recognisable, although they get modernised. 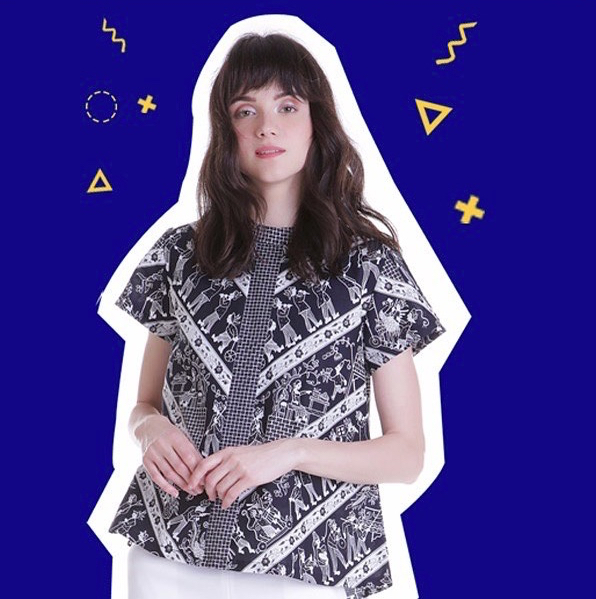 
They had a recent collection with bouquets and birds. One with a Chinese parade in 2018, based on a famous Batik attributed to Batikentrepeneur Van Oosterom, who I am also researching, and can be found on the cover of 'Van koelies, klontongs en kapiteins; Het beeld van de Chinezen in Indisch-Nederlands literair proza 1880-1950' by Widjajanti Wediarini Dharmowijono.
But then there was the one that still surprised me. The DAYS collection from 2017 had the name Prajurit, soldier. It is a one on one copy of Batiks know as Batik Kompeni, or Batik Perang Lombok. Thought is that they depict the Lombok War (1894) and were made for the winner, which are in this case the Royal Netherlands East Indies Army (KNIL). The story goes that KNIL soldiers would order these Batiks to display their victory. Adding to this, they made their wives wear them.
There is still much unclear on how accurate the story on these type of Batiks is, but there are many Batiks with war scenes depicted on them dated from early 1890's till beginning of the 19th century. The only pictures I found thus far of people wearing them, is of Javanese women accompanied by KNIL  soldiers...
A complex design on many levels and I think appropriate to address here. To show the shared history through Batik, we have many options. But we also have to first uncover their stories better, who made them and why, and in more depth. However it is interesting that a motif I see as problematic, was used as a Fashionable print. In view of Cultural Appropriation this is also a very difficult one to explain. What happened in many Indo-European designs was in fact an early example of Cultural Appropriation. Yet it was made first specifically by and for a group that was of Indonesian and European descent. And this is were the bridge is, a not so easy to take bridge, looking back at the beginning of this post with all the thoughts on our Royal couple visiting Indonesia. But it is a bridge we have to maintain by sharing stories, so we can build a stronger path to pass on our shared history and heritage. 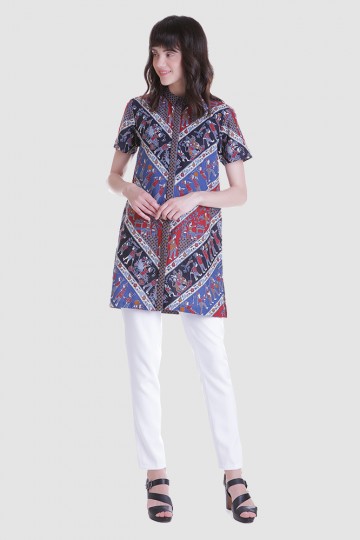 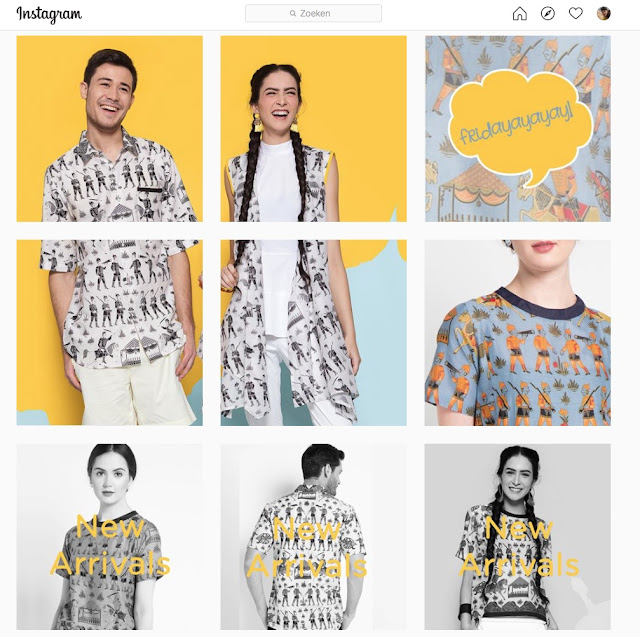 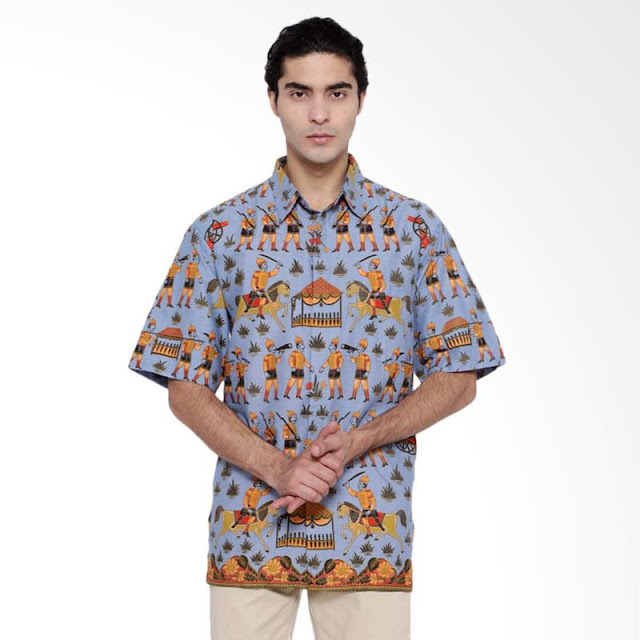 'Prajurit' shirt for men from the DAYS by Danar Hadi collection 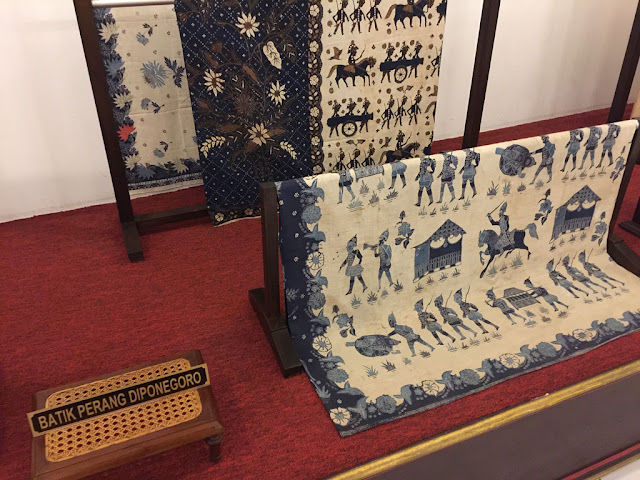 The original Batik on which the 'Prajurit' collection is based on display
at Danar Hadi Museum in Solo, photo by me

*** Photos are from different media sources online or by me - source is mentioned, of some it is the site it was published on