Finally had some time to relax, I had a wonderful holiday in Stockholm and got some things done in between. Still not back on track, but on my site you can read about a competition I'm participating in ( I CONTEST - PRINT IT!, please vote for me ) and about my adventures in London ( Practices of Sustainability, Étude #1 and Étude #2 ).
Thinking about what I should share with you first; the Tapa cloths in Cambridge, my second visit to the Fashion and Textile Museum, meeting Rens Heringa and more things I did here and abroad, I remembered these interesting collection pieces I found in the V&A collection.
I send a bunch of emails to them trying to visit their archive, not aware of the huge size of the Victoria and Albert Museum. Silly me, you can imagine my jaw-dropping when I was standing at the entrance.
Well, visiting their archive is still on my wish-list and next time I'm heading to London I will be writing them months in advance!

Preparing for me first stay in the UK, I searched the web for interesting places to visit. Looking in online archives, I found that the Victoria and Albert museum had a great, yet not greatly documented, collection of Batiks.* Most makers are 'unknown', but I can not find if the Batiks are also unsigned.
I totally fell in love with two pieces of their collection, one I hope to wear one day ('blink') and one looked so familiar, but where did I see it before... 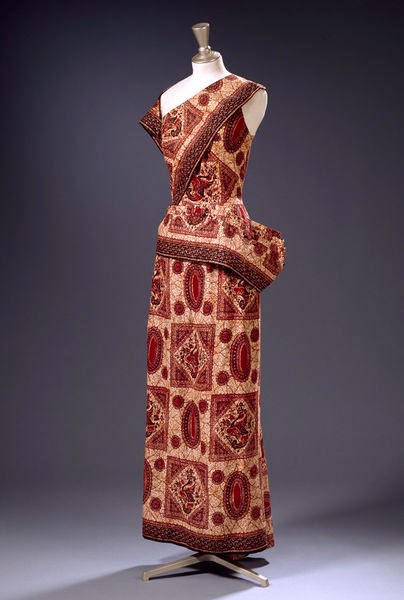 Because I can't say it more beautifully, I copied this text from "Catching a Train in the Rain":
"The gown is an excellent example of a visually compelling, attractive hybrid object. The ‘West African Evening Dress’ by London-based designer Matilda Etches is a European interpretation of a traditional style of wrap worn by women in West Africa. It was made using fabric manufactured in Manchester. The border of the fabric incorporates Morse code ‘V’ and  '...-' as well as the letter ‘V’ for victory in its pattern. Produced in the wake of WWII in 1948, it is also exemplifies the environmental and aesthetic perspective of its time. It is made of cotton rather than silk, and though the wrapping style is based upon African tradition, the overall silhouette is reflective of Dior’s pivotal and pervasive “New Look” of 1947. The gown is a beautiful physical representation of dialogue between cultures as well as an example of Manchester textile industry prowess establishing a practical, immediate connection between the heritage of Manchester and the heritage of other cities, countries, societies, and industries of the world. ** 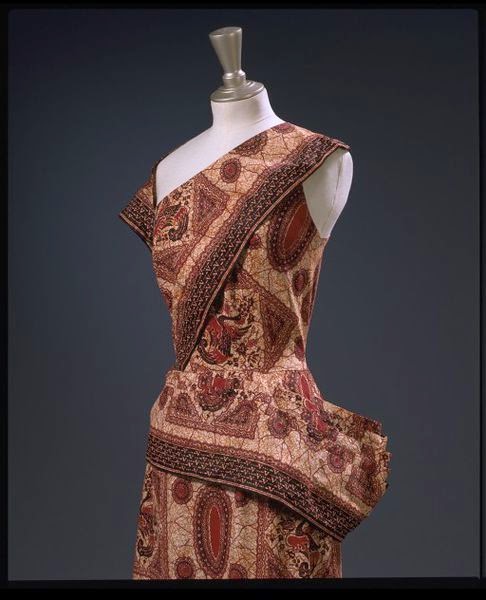 Matilda Etches is now almost entirely forgotten except as a theatre, ballet and opera costume-maker. However, she was an extremely talented couturier, whose fashionable clothes were innovative and very carefully made. When she donated a selection of her work to the Museum in 1969, this dress and a 'Butterfly' cape were shown to senior Museum officials as key acquisitions. They were the first modern fashion items to be accorded this honour.*** 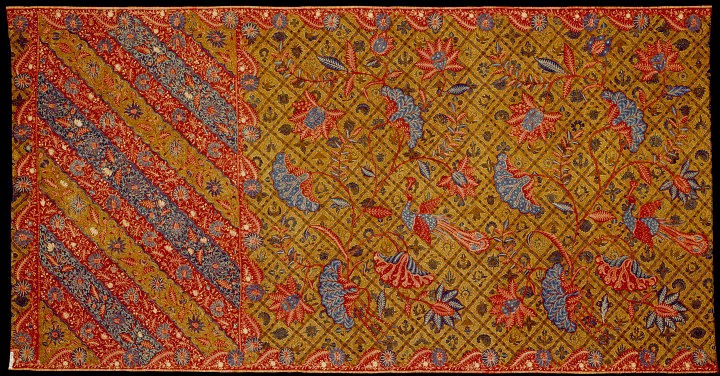 The cloth above is the other collection piece that caught my eye. It looks like a Batik Tiga Negeri  and the description in the archive is suggesting the same: Between the end of the 19th century and the Second World War, certain types of highly valued batik cloths drew on the skills and styles of more than one production centre. Known as tiga negeri (three towns) or dua negeri (two towns) they typically reflected the distinct designs and colour palettes. The main body of this tiga negeri design features large flying peacocks (in red, blue and white) between flowering plants, floating on a background that is in the typical colour scheme of Surakarta. It also features squares formed by a lattice bamboo design on the husked grain of rice or gabah sinawur background on which sit leaf, flower and house motifs. The kepala (or head) has a diagonal design in alternate panels of brown, red, blue, red, brown, red ground, with gabah sinawur background on brown sections and floral designs.
The body of the cloth is likely to have been made in Surakarta; the superimposed floral motifs and the kepala in part are likely to have been worked in two different centres on the north coast.****

But why does it look familiar? I suddenly remembered that it reminds me of a Vlisco. When I looked it up on the Vlisco stories website, I couldn't believe it, this is quite sama sama indeed! 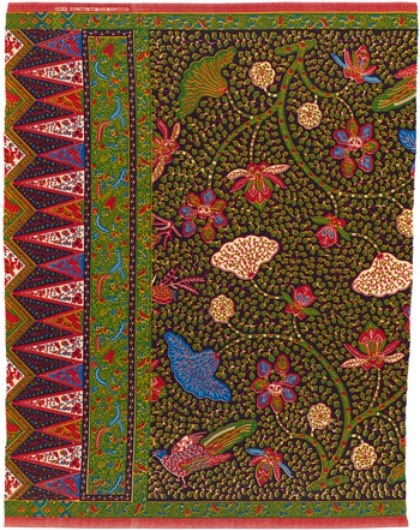 This Vlisco design known under the name "Good Living" is a real classic. This design is already 75 years one of the most popular patterns in Ghana. The Batik from the V&A collection is estimated to be made around 1920, that means that these designs are created not more than 20 years apart. Maybe the Batik was a very populair design as well or could it be just coincidence...
This description from the Vlisco stories site points out also its heritage: The colourful flower motifs attest to the Chinese style of batiks that were made in the Javanese village of Pekalongan, where many Chinese traders had their domicile. The name Pekalongan became linked to a dying and printing procedure that is unique to Vlisco and is characterised by very strong and saturated colours.*****
I knew the design from the video I saw at the 'Hollandaise' exhibition in 2012.****** The owner of the fabric explains that you wear this fabric for protection. If people are jealous or even hate you, they cannot harm you. "A good life brings forgiveness". Does the motifs on the Batik mean the same thing? Was it worn for protection or did it mean already that you had a good life?
I would really love to see the original Batik next to the original Vlisco design and find out more about this interesting similar design! 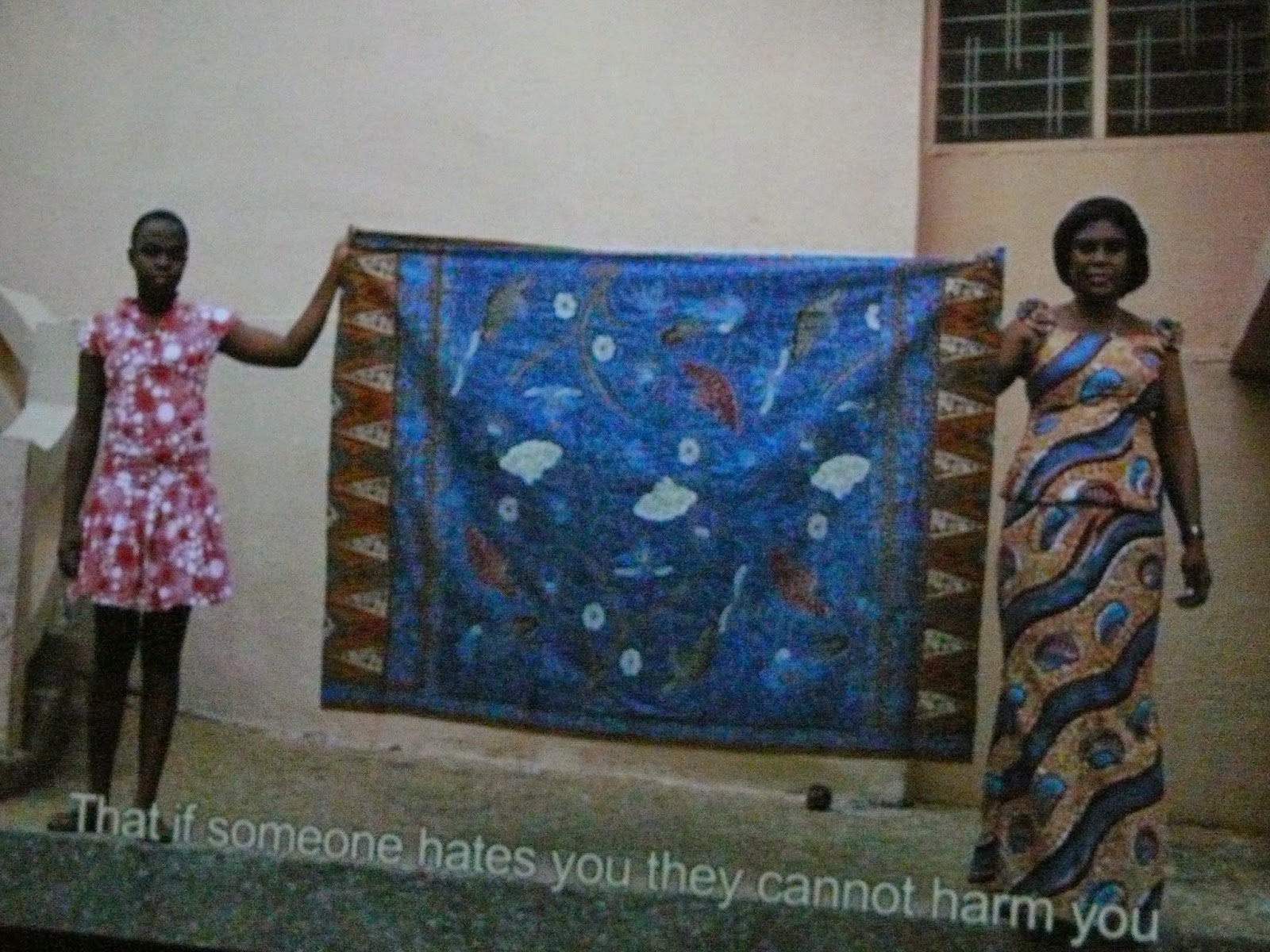 Still from Videoprojection 'The Currency of Ntoma' by Godfried Donkor